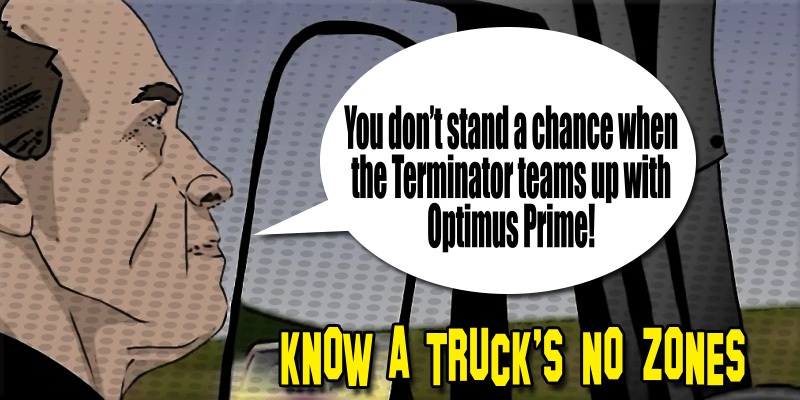 You may think your newer vehicle with life-saving safety features can withstand a hit, even from a large truck. It’s true that most of the larger SUV’s weigh somewhere between 4,200 and 5,400 lbs. But large trucks, especially those with a truck-tractor and trailer combination can weigh up to 80,000 lbs. These trucks require more acceleration and deceleration time than an average passenger vehicle and can have blind spots in various locations. So, if you’re in the habit of cutting in front of one, your Honda Accord could be transformed into a Honda Accordion. You and your new SUV will live longer if you learn important tips about sharing the road and safe driving around trucks, buses and large commercial vehicles.

ALWAYS STAY OUT OF A TRUCK’S NO ZONE

There are four blind spot areas (so, every side of the vehicle)

This is another sign you may see on a commercial vehicle. Buses and trucks need extra room to turn. If you are in a lane next to them, you should just hang back a bit until they’ve completed their turn so you don’t get cut off or pinned between them and the curb.

In addition, the weight of a commercial vehicle puts tremendous stress on their tires. So, their tires are like ticking time bombs, ready to go off any minute! If you’re near a truck and a tire blows, the steel belts in their tire can take your windshield out and do a “Jane Mansfield” on you. Another good reason to not linger near a truck, because “headless” isn’t a good look (well, maybe for some).

Having an accident with an 18 wheeler almost always leads to injuries. So, again, share the road, give truckers space and don’t linger around them. Insurance companies say accidents with 18 wheelers are usually the fault of the other vehicles.