HOW TEXAS LAWS HAVE CHANGED 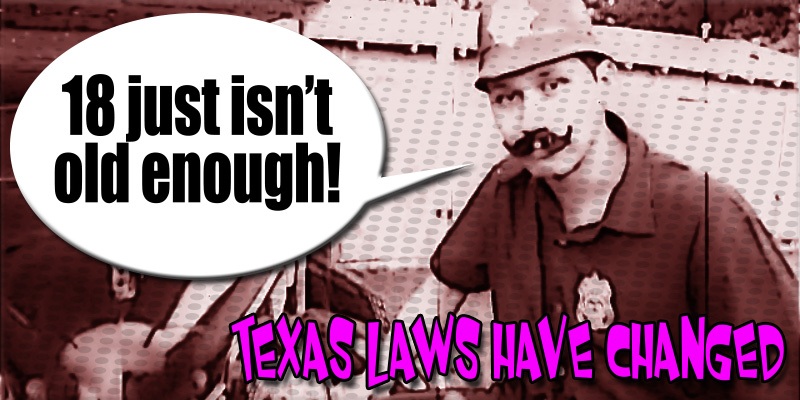 A new law has passed in Texas that you must be 21 years of age to purchase or possess tobacco products (unless you are military). And if caught, that will get you a “minor in possession” (as it would if you were caught with drugs or alcohol, because nicotine is a drug). This follows New York, Florida and California which for those states it’s been the law for several years. Well, I’m not saying this is wrong by a long shot. Nearly 80% of Americans smoked in the 50’s-60’s, and now it’s less than 17%. But what I would like to point out is how Texas laws have changed since I was a kid. Back then, you could smoke out the window of the high school, in front of the teachers. Teachers had their own smoking lounge where they kept booze and Xeroxed their butts (that’s another thing you can’t do now) . You could even smoke on a plane! Now they’d land the plane and cart you off to jail if you are caught smoking.

What Else Has Changed

Another new law passed in Texas that you must be 18 years of age to purchase cough syrup. Cough syrup? Don’t even get me started! Heck, we had trash can punch at our prom in the high school gym with everclear grain alcohol in it. The drinking age was 18 in Texas in the late 70’s. Then it went up to 19 and “hovered” there for awhile. It eventually went back up to 21. At some point, I believe the drinking age was 4 (maybe that was in other countries). I remember taking my sister out drinking on Greenville Avenue when she was 12. We didn’t want to stay home and “babysit” so we put makeup on her like a baby hooker and took her with us. She ordered a “mom” drink and blew her cover. Ugh!

In the 70’s, everyone in the car could have an open container, even the driver. I thought you’d get a ticket if you “didn’t” drink and drive in Texas. So, this new law is sure to get some ribbing. Beer to go and booze delivery is the new thing. You can purchase no more than a 12 pack of beer at a brewery, and get it to go. You can also order booze from a food delivery service and have them bring the booze right to your house (or jail cell).  But they probably won’t bring you cigarettes.