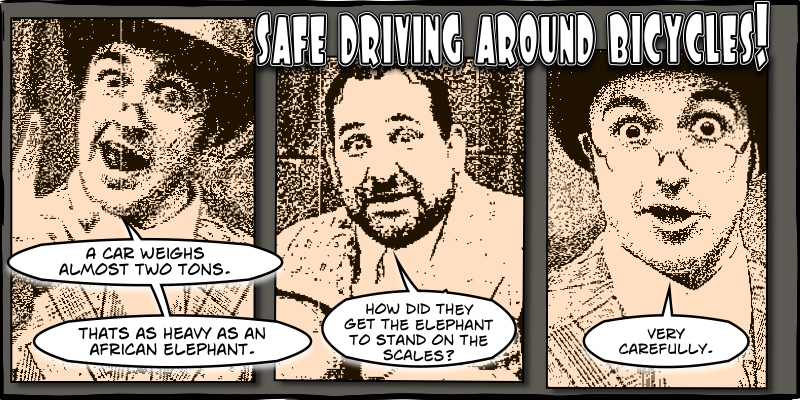 There is one law regarding safe driving around bicyclists on the road that I was unaware of. This makes me think that there are likely many more that I need to be made aware of since I live near a heavy biking area. Before passing a bicycle traveling the same direction as you, the law requires that you pass safely by leaving a minimum clearance of three feet between your car and the cyclist. Not all states have enacted this law. My state of Texas has not. But there are a number of cities that do enforce it in their jurisdictions. According to the NHTSA (National Highway Traffic Safety Administration) bicycles in the roadway are considered non-motor vehicles (a vehicle, just like a car, only without a motor). They should therefore behave as though they were a vehicle on the street, riding in the same direction as other traffic that is going their way and following the same traffic rules as cars. So, cyclists are on the same level as motorists. Now that I know the law or “rule” regarding safe driving around bicyclists, I thought I’d dig deeper to see what other laws regarding bicycles and cars that I am currently unaware of.

Pointing Out The Obvious Differences

The argument seems to be that not only can bicyclists not keep up or get up to an immediate speed as the flow of traffic, stop signs and traffic lights were designed with cars in mind, not bicycles. Every year, hundreds of bicyclists die in traffic accidents involving cars and thousands more are injured, according to the NHTSA. And drivers can play a big role in reducing those statistics. Of course, bicyclists have responsibilities too. If you are a cyclist, when you are in a car you most likely are more patient with a fellow cyclist. You realize that there is one less car on the road today polluting the environment, using fuel and creating potholes.

Know Your Hand Signals and More!

One responsibility of both the driver and cyclist are in knowing and using hand signs for right and left turns. If the cyclist is planning to make a right turn at an intersection or onto a street, there should be a raised left hand in a squared position or an extended right hand. When exiting your car, look out your side mirror first to make sure than a bicyclist is not passing. Bikes should always ride in the direction of traffic, always use hand signals and always come to a complete stop at signs and red lights. They should also ride in the center of the lane whenever possible. And they should ride at a fast clip and look over their shoulder and use hand signals when changing lanes or turning.

Remember, a car weighs two tons or so, while the average bike weighs a mere twenty pounds. Always pass them slowly and smoothly and for heaven’s sake, don’t HONK, even if you know them!