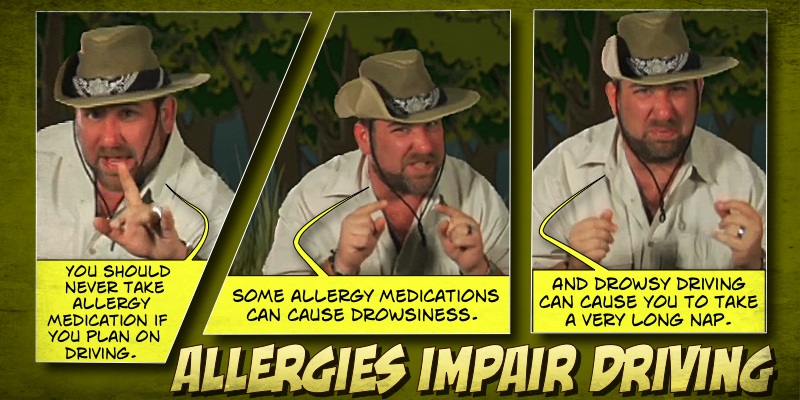 I recently found out that I am allergic to nuts. So I have stopped dating, altogether. I am also allergic to cats. Not the feline, but the musical “CATS.” I’ve seen it once on Broadway and my eyes swelled shut (any musical, for that matter). The real bummer is that I drove to the theatre, rather than taking a cab. I know, in New York City? Am I crazy?? Yes! I realize that I am living proof that allergies impair driving but I was curious as to what studies were done on this and how driving with allergies increases the risk of accidents.

How Do Allergies Impact Driving?

According to the American Journal of Allergy and Clinical Immunology, “Drowsiness and lack of awareness can affect all drivers with studies revealing that 1 in 5 accidents are related to difficulty staying awake.” They also state that “Allergies can, and often do, impact an individual’s quality of life including problems with sleeping, daytime drowsiness and trouble focusing.”  If you are driving or planning to drive, avoid sedating medication such as over the counter Benadryl, chlorpheniramine and others alike. You’ll find that the crimp inside the box and the label on the bottle will always heed a warning “Do not take this medication and drive a car or operate heavy machinery.  This medication may cause drowsiness. Don’t take this medication with alcohol.” So, an alternative, such as allergy injections are a non-sedating and apparently the most effective way to treat allergies while avoiding sedating medications.

What You Can Do To Avoid Allergens

If you must drive, try to plan your drive during low traffic hours, like very early morning or late evening. This way, you will spend less time on the road while avoiding high levels of air pollution. Also avoid driving with the windows down, but instead use the air conditioner on the “re-circulate” mode to keep outdoor vents closed. But if your allergies are that bad, you should avoid driving altogether.