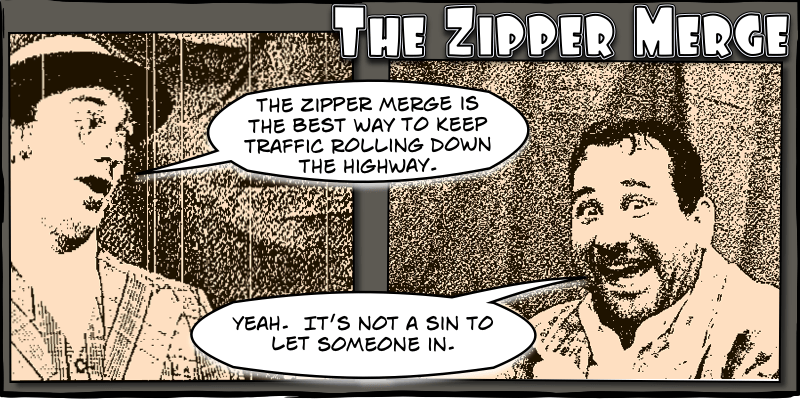 Whatever happened to the zipper merge? And when did that driving courtesy become a thing of the past? I was riding with my sister and we started passing signs telling us that the lane we were in was ending and we will be merging in 500 feet. Then another sign that said 200 feet. Then, of course, our lane was close to ending. So she had to come to a complete stop and wait for someone to let her merge. As you would expect, no one let her in. She even tried using her signal, as if that was going to help. She should have already had it on in the first place. Not that I am a back seat driver, and I certainly didn’t want to correct her driving skills at that moment. She asked me to roll the window down and beg someone to let us merge. I refused to humiliate myself, turned my back to the window and held my ground. Although this wasn’t the best time to criticize her driving skills, this was a good time to teach her a lesson. Yes, she may get mad at me, but we’re sisters and you can’t divorce a blood relative (well, maybe Jerry Lee Lewis could have). Minutes ticked by and I asked her if anyone was going to let her in. She said “I don’t know. Maybe this clown will let us in.” I thought she was just angry and being a jerk. But I looked behind me and there was actually a clown in the car next to us. It was on a hot Texas summer day, with no air conditioning in his little clown car. And his makeup was melting like Heath Ledger playing the Joker in Batman. The clown did not let us in. We had to sit there like dopes until the entire lane of traffic ended. Lesson learned? I hope so.

How Does The Zipper Merge Work?

The way they teach the zipper merge is one car, per car. If the lane is ending, you should begin merging when you can after you see the first sign. It just makes sense if cars are merging the entire 500 feet and others are merging when the lane ends, those drivers that are already in the continuing lane are being held up by allowing so many cars to merge, thus disrupting the flow of traffic. The same goes for cars merging onto the freeway. Although in Texas, cars that are already on the freeway have the right of way and cars entering the freeway have to yield, if traffic is at a crawl, cars on the freeway should allow one car, per car to enter the freeway in front of them.

How Not Doing The Zipper Merge Causes Road Rage

Please don’t try to be a hero by holding up traffic to allow half a dozen cars to merge in front of you. It’s likely that the driver behind you is counting how many bullets he needs to load into the chamber of his gun because he’s already late for work and hates heroes like you. And, lastly, if traffic is at a minimum and speeds are normal, it wouldn’t hurt to take your foot off the gas to allow a car to speed up and merge in front of you.