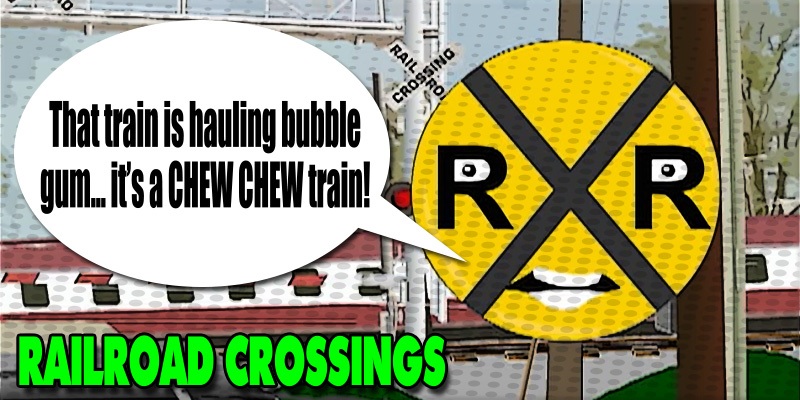 I grew up in a house that stood about 1,500 feet from the Burlington Northern rail line. And when those trains would sound that crazy horn at wee hours of night it would scare the bejeezus out of me! Heck, I think because of that, I wet the bed until I was in middle school. My parents eventually broke me of the bed wetting, though. They bought me an electric blanket. Is that good parenting?

In the United States, someone is hit by a train once every two hours. And, it is said that these crashes are almost completely avoidable. A train hitting your car is similar to a car driving over a Coke can. The train always wins. Oftentimes, the driver error is in misjudging or miscalculating the speed and distance of the train, thinking they can quickly cross without incident. Some collisions are due to a driver blatantly ignoring the signs and going around the crossbucks. And sometimes the tables turn and the car actually hits the train in the side. If you think about it, a passenger train will have all cars lighted, while a freight train will only have lights on the engine and perhaps the last train car since they seem to have done away with the caboose. On a dark night, those dark cars may blend in when you are traveling on a country road or rural area.

How to Avoid These Collisions

In most states, the laws are quite similar when it comes to the distance a driver must keep between their car and a train. A driver approaching a railroad crossing must stop no closer than 15 feet from the nearest rail (and no further than 50 feet). And they must remain stopped until permitted to proceed and it is safe to proceed. Even if there are no crossbucks or there are mechanical or electrical issues with a signal device, the car must always yield the right of way to a train, because “duh.”  If you are in bumper to bumper traffic, and you approach a railroad track, you must still remain behind the safety line (15 feet), away until there is enough space on the other side of the track to completely clear your car from being on the track, should a train happen to approach.

Now I own my own home, which I have estimated to be about ¾ of a mile from the nearest rail line. I can hear the whistle blow late at night and now I find comfort in the nostalgia that it brings. I can’t imagine the money a homeowner would save by purchasing a home right next to the tracks. Surely they would spend a small fortune in ear plugs and therapy.