STOPPING FOR A SCHOOL BUS 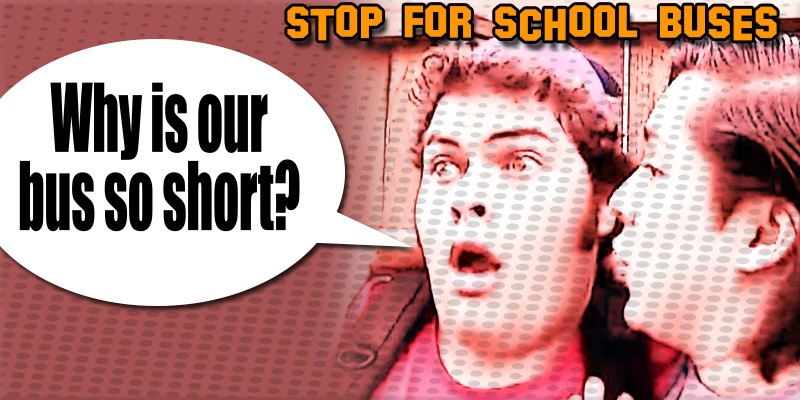 I have written several blogs striving to educate drivers about stopping for a school bus. This topic is a priority whenever I teach defensive driving. Since many drivers take the course online now, there are fewer students in my classroom. So. I kind of joke with them that we at Comedy Defensive Driving School are doing our part by spreading the word, 5 or so people at a time.

I had just spent a rake of time discussing this topic in my class. After class, I heard a public service announcement on the radio warning drivers to stop even if you are driving on the other side of the road, going the opposite direction. This was as I was pulling out of the parking lot. Of course, I almost wrecked the car (which would really look bad). I usually try to only do that away from a class location. I was totally taken aback at how wrong this information was. And the ad was coming from a local high school radio broadcast! Then, I realized that they are likely referring to a situation where there is only a painted line dividing direction of traffic lanes. But, would drivers listening to that announcement understand that you do not stop if your side of the road is separated by a median without a split or divide? Perhaps this ad only had a set amount of air time and they had to edit it down. But, public awareness is the key. And the rule is just not as simple as they’ve stated.

WHAT THE TEXAS DEPARTMENT OF PUBLIC SAFETY SAYS

On TX DPS Website, the school bus article from fall 2019 says exactly this:

According to state law, if a school bus has alternating flashing red signals visible from the front or rear, drivers must stop before reaching the bus. Drivers can only proceed if the flashing lights are no longer activated; the driver signals you to proceed; or the bus has resumed driving. Approaching drivers do not have to stop for a school bus that is operating a visual signal if the roadway is separated by a physical barrier or an intervening space.

If a highway is divided only by a left-turning lane, the roadways are not considered separated, and drivers must stop.

HOW MISINFORMATION HAS DEVASTATING RESULTS

Three quarters of the year has passed and in the first 9 months, school bus drivers have reported more than 95,000 cars passing illegally in a single day. That would average 17 million violations across the school year.