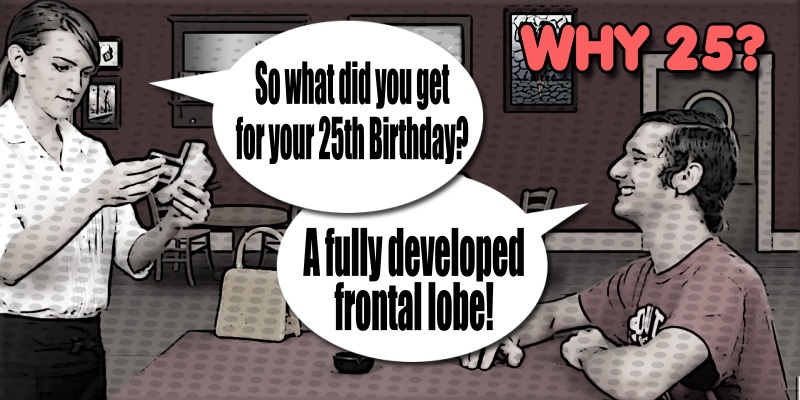 I personally believe that emotional maturity should determine insurance rates. According to my “research” (buying my insurance agent a drink), automobile insurance rates generally drop when a driver turns 25 years of age. Of course, any decrease in rate is also affected if you haven’t received any tickets or weren’t involved in any accidents. It would be near impossible to avoid one of those within your 9-1/2 years of driving experience if you live in a large city with lots of traffic.  That is assuming you got your license at 16 and have been driving with a learners permit at 15-1/2. I have also heard that insurance rates tend to decrease for males at 25, but for female drivers at 21. Some insurance agents say this is true, while some say it is not. But it is undisputed that a young male driver’s insurance rates are always higher than a female’s. I put my daughter on my insurance policy when she turned 16 and my insurance rates more than quadrupled! Yikes!! How much would my insurance have gone up if she was a boy? I actually did the math and found that it would have been cheaper to send her to Sweden to get a sex change. And she probably would have gone along with it. She’s pretty easy going.

I have read that the frontal lobe completely develops by 25 years of age. And, it is all about taking responsibility and considering consequences for your actions. The frontal lobe is the part of the brain that controls important cognitive skills in humans, such as emotional expression, problem solving, memory, judgment and impulse control. This is actually one of the last areas of the brain to mature and scientists say may not be fully developed until halfway through the third decade of life. Of course, experience and time behind the wheel also affects an insurance rate drop.

While this may be true, scientifically, I believe that some kids are just more mature than others (old souls, as they say). I know kids that work three jobs while putting themselves through school and helping to support a family. Now, that’s mature and responsible. Some young people are emotionally mature, while some never grow up. Heck, I have friends my age who are still immature and always in trouble. So, why should those who are mature and responsible pay the price for other’s actions? I believe insurance rates should not be based on one’s age, but rather be based on one’s emotional maturity. Perhaps a young driver should be required to pass an emotional evaluation exam. This, combined with driving errors on their driving record should determine what their insurance rates will be.