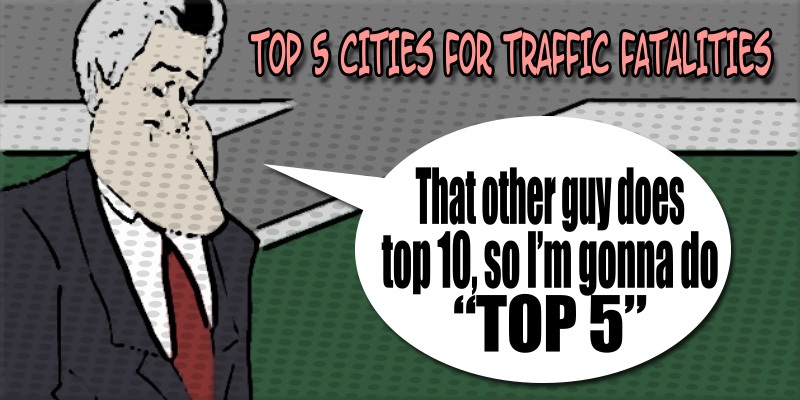 It is not surprising to me that my city has been listed in the top 5 cities for traffic fatalities. I am quite certain that I am not the only driver in this city who wonders if I am being “punked” on my commute. Every day we encounter the dangerously short ramps that merge directly into access road lanes. And the exit ramps that are entirely too close together. Not to mention (but I will) those entrance and exit ramps that are also entirely too close together. We actually ranked top five in 2017. But, according to the NHTSA (National Highway Traffic Safety Administration), 2018 was third-deadliest of the decade on American roads.

In 2017 the NHTSA reported that Dallas, Texas had the fifth-highest rates of traffic and pedestrian traffic fatalities in the United States. And 50% of those fatal and severe injury crashes occurred on only 8% of our city streets. Two years fast-forward (yes, two years!) and the Dallas City Council and Department of Transportation have both agreed to adopt the nationwide Vision Zero Plan. This plan would “formally commit the city to taking steps to bring down fatality rates to zero.” They state that their nonprofit mission is to offer cities the resources and strategies to assist in the process.

According to Michael Rogers, the Director of the Dallas Department of Transportation, it is an intentionally recognized strategy that eliminates traffic fatalities and severe injuries relating to automobile users, pedestrians, as well as cyclists. He says that it is based on the belief that no loss of life is acceptable and that traffic fatalities and severe injuries are all preventable.

OTHER TEXAS CITIES WITH BAD DRIVERS

Now, I must say, Dallas isn’t the only city with bad drivers. Actually, there are six cities in Texas that rank in the top 13 for traffic fatalities. The other five cities are Fort Worth, Houston, San Antonio, Austin and El Paso. But Dallas is at the top of that list. Statistics from 2017 also showed that on average, two people a week died in traffic incidents in Dallas. Yikes! It’s about time they did something about it! Don’t you think?