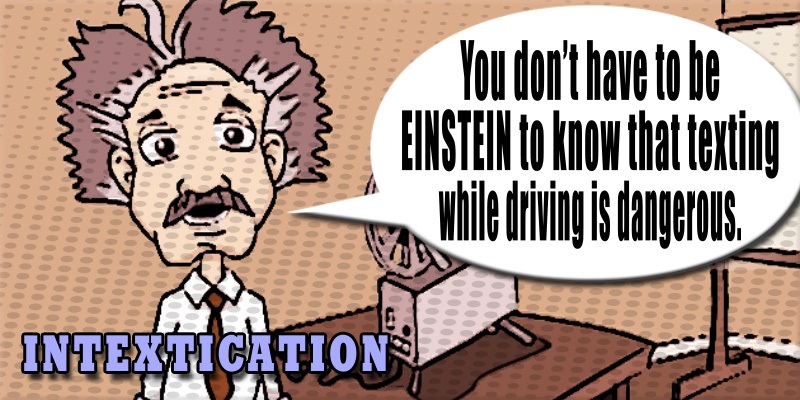 I was curious if “intextication” was just a made-up word or if it’s a real thing. So I looked it up on the ever so reliable Wikipedia site (haha) in their “wiktionary” and there it was! It means “distraction by text messaging while driving.” While the definition from Techopedia says that it is “a term coined to refer to an individual who is distracted by texting or composing an email on a handheld device while walking or driving, and is therefore unaware of the surroundings.” It is said to be called the new DWI (awww…isn’t that cute?). And why not, since texting makes a crash up to 24 times more likely. We are all well aware of the disturbing number of crashes due to drinking while driving. Intextication and intoxication, when you think about it, the two have so many parallels.

• Inability to maintain a single lane, or to stay in your own lane.
• Number of accidents and fatalities incurred as a result.
• Both are illegal.

If a driver begins to drift out of their own lane, a law enforcement officer may assume that they have been drinking and may pull them over with due cause. And don’t expect mercy as you are explaining that there was no alcohol involved, yet there was a severe distraction. We are all aware that driving while intoxicated carries stiff fines and penalties and could possibly remain on your driving record indefinitely. While distracted driving is considered less severe, legally and financially, both are equally as dangerous.

Nearly everyone knows of someone who has had a family member killed by a drunk driver. If we don’t get a grip on the texting while driving situation, these people will also suffer the loss of loved ones killed by someone who couldn’t wait to finish a message.