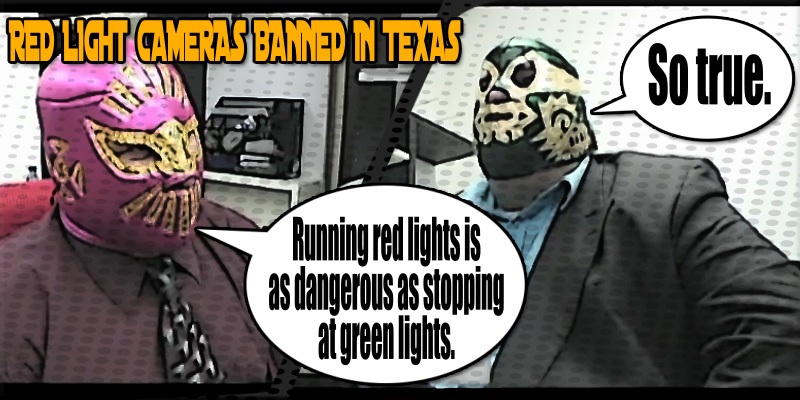 I’ve written several blogs over the years about my dislike for camera lights. And, I am happy to say that as of June, Red Light Cameras are banned in Texas.

The Good and Evil of Camera Lights

I say good riddance to camera light tickets! As my niece would say, they have just yee’d their last haw! I had received two tickets for blowing through a solid yellow light. Of course, solid yellow sounds much better than a red light. Most drivers have gotten camera light tickets for a rolling stop (while taking a right on red or at a stop sign). Now, I’m not just off my meds when I say that some traffic lights are just way too short. And one certainly should never slam on the brakes at a yellow light for fear of being rear-ended by other drivers who are planning on making that light as well. Plus, foregoing a $75 fine by beating the light is pure satisfaction.

Some drivers believe that the camera lights prevent accidents. But, I would vouch for those other drivers that would agree that most of us goose it to get through a solid yellow light before it turns red and, of course, that factors into high-impact crashes in intersections.  So, adios camera lights! That’s the last mug shot you are getting of me! (Or, a mug shot of someone else driving my stupid car).

So What Can We Expect Now?

So, this is how it’s going to play out. This new law will actually take effect on September 1st. This will allow communities more time to complete any contracts they have with companies that install and monitor their camera lights. Some cities will stop processing violations immediately, while others will still expect to receive revenue from violations already issued. These communities have the option to terminate their contracts immediately, but some may still have to pay early termination fees. So it may in their best interest to keep their camera lights activated to receive revenue to pay these fees.