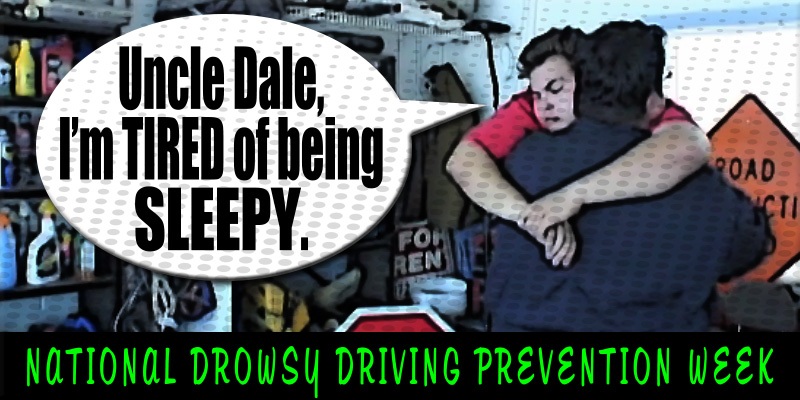 Well, dang it, Sunday was the last day of National Drowsy Driving Prevention Week and I must have slept right through it. The National Safety Council set November 3-10 as a week to remind drivers that drowsy driving is impaired driving. And, even if you survive a crash, there are some pretty stiff penalties.

We all know when we’ve had a little too much to drink and shouldn’t drive. But signs of fatigue are said to be hard to identify. And they are both just as fatal. The similarities of driving drowsy or under the influence of alcohol include a slower reaction time, inattention or decreased awareness to hazardous situations and impaired judgment. Both are said to be three times more likely to cause a crash. Driving after 20 hours without sleep is also the equivalent of driving with a blood-alcohol concentration of .08 (which is the legal limit).

DETERMINING WHAT CAUSED THE CRASH

Of course it is difficult to determine the cause of a fatal crash due to drowsy driving. According to The National Sleep Foundation, there are a number of clues at the crash site that indicate this particular cause. Usually there is only one vehicle involved in the crash and the only person in the vehicle is the driver. Also, their injuries tend to be less life-threatening since they were likely asleep (completely relaxed) at the wheel when the crash occurred. Plus, no skid marks on the road (only in their undershorts).

GETTING THE POLICE INVOLVED

Of course there are tests to determine if a driver has been drinking. But there is no blood test, breath test or other objective test for drowsiness behind the wheel. This makes it difficult for police to identify drowsiness as the cause. But several states have passed laws where the police can charge a driver with criminal negligence if they injure or kill someone while driving while sleep impaired.