Kids In a Hot Car 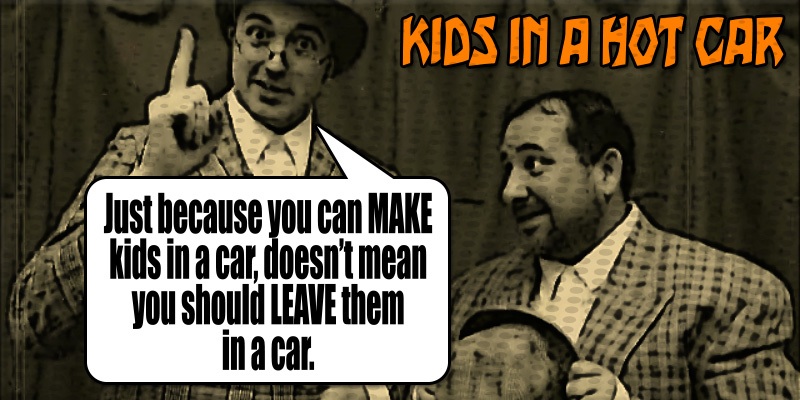 I really don’t know what exactly created change or forward thinking in regards to leaving kids in a hot car. Perhaps it was a slow evolution over time. When I was a kid, our Mom would leave us in the hot car for hours and go into the grocery store, with no problems. If you do something like that now, you will wind up on the Six O’Clock News being handcuffed and hauled off to jail. So, are temperatures now reaching higher highs? Are car interiors now being made from materials that fuel the heat? Or perhaps kids are just not acclimated or climatized to warm conditions since they rarely go outdoors to play. Before electric windows and locks, we had manual, crank windows and manual locks. With electric windows and locks, what if Mom took the key with her? You may be able to unlock the doors but certainly couldn’t roll down the windows without the key. I didn’t even know that you can still purchase a car with manual locks and windows, until my daughter’s dad purchased her a brand new Toyota that way. He claimed, if she were to lose control and drive into the lake, the electrical system could be compromised and her power windows and locks would not work. But it was because he was just cheap! This guy would dry out a used paper towel so he could re-use it. Although, it was a good save. He is a clever guy.

So, perhaps we’re just better educated about the dangers of leaving kids in hot cars. Or, perhaps kids are just more important than kids of my generation. You certainly don’t want to leave your car running, unattended, with or without kids in it. Leaving the air conditioning on, with the keys in the ignition may seem like a better idea than dragging tired and cranky kids into the store. But keys in the ignition and/or leaving the car running carry a hefty fine. While you may think that you will only be in there for 3 minutes, someone will inevitably write a check and you will be in there until you have grown a full beard. Because no one knows how to write a check, anymore, and no one knows how to take a check, either.