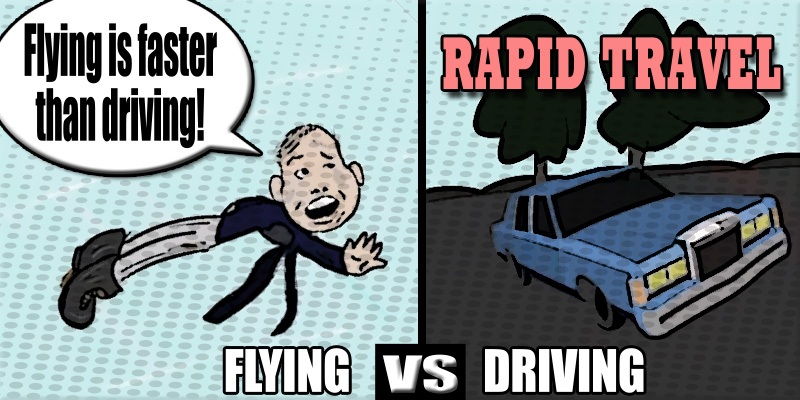 I flew to Chicago from Dallas in 2 hours and 5 minutes. By car, it would take me around 18 hours. I’ve done that before. What a boring drive that is. Illinois, as well as most of the Midwest are void of scenery. The land is just flat and ugly (like my sister Karla). When I was landing, I was thinking about how crazy it is that you can glide in the air at such a high speed. Even considering that you can sit in a chair and go 100+mph is pretty cool. I bet if you went back in time and told people that one day you will be able to do that, you would have been burned at the stake. Heck, if you told someone then that in the future you’d be able to cook a meal in 4 minutes in a microwave oven, they’d be tying you to that stake. Thankfully we didn’t have microwaves then! It makes me curious what the future holds for us in regards to rapid travel?

It’s true that cars go faster, can be driven longer and speed limits are higher now. Fuel prices are higher as well, so weighing out the time you would spend in the car as opposed to paying for a plane ticket pretty much depends on how many family members you are traveling with. Or just taking the ones you like. If you want to see the Grand Canyon, you have no choice but to drive there. Not by plane, unless you own and fly one. And there is only one way in and one way out from the main highway. Every time I’d be driving between California and Texas, I always planned to visit the Grand Canyon. But, by the time I’d get there, I’d be over the driving business and just want to get home! Maybe next time, kids!

Some people live for road trips. Me, not so much. I spent most of the late 80’s and early 90’s on the road as a stand-up comic. Although I have great memories and stories, I wouldn’t want to do that again. I’m more of an airline girl. If I can’t fly there, I’m not going. Also, it seems that it is more dangerous to drive than it is to fly. Although a 747 can carry up to 660 passengers, the average person living in the U.S. has a 1 in 102 chance of dying in a car crash, compared to a 1 in 205,552 chance of dying as a passenger on an airplane. This means that you are more than 2,000 times more likely to die in a car than on a plane.

As for me, I also consider the pain factor of each crash when thinking about car travel vs. plane travel. If my plane goes down, it would likely be instant death. A car crash seems a bit more traumatic to me. I think it’s goofy that while flying, the flight attendants will wake you up out of a dead sleep to make sure your seat belt is buckled under your magazine or blanket. Who cares, really? I mean, if the plane goes down, when identifying you, the only thing left after the crash would be your seat belt buckle and your teeth. And they already know you were on the plane when you checked in (before you checked out)!